The “Sensibilités environnementales” series publishes collective works focused on literary texts that develop a broad reflection on nature, and – in particular – on the place of man in the world inhabited by other living beings. The series is open to all French-language literature and all periods, as well as to different critical approaches. This book, innovative on the Polish publishing market, is an example of the ecocritical perspective used in literature research. It contains twenty texts written by specialists in French-language literature of the 20th and 21st centuries coming from different Polish and European universities and research centers. In their texts, arranged in five chapters, the authors look at literature through the prism of the links between man and nature. By analyzing different ways in which writers talk about non-human worlds, researchers consider key issues such as the attitude of human beings towards nature and towards the planet, the human-animal relationship, the borders between the human and non-human worlds, ecology, or the quest for a non-anthropocentric perspective. 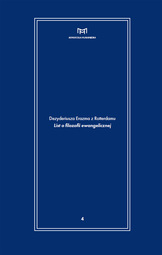 Dezyderiusza Erazma z Rotterdamu "List o filozofii ewangelicznej"
A bilingual edition of the "Epistola de philosophia evangelica" by Erasmus of Rotterdam, with the preface dedicated to the origin of the "Letter", the history of the dispute with Martin Luther and
23,20 zł
Details