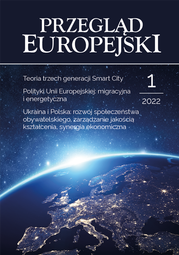 The content of the issue focuses on three groups of topics:

The first topic is addressed in a theoretical article in which the authors analyse the Smart City concept using the theory of three generations of 'smart city' development. Knowledge of substantive changes in understanding the 'smart' component of the Smart City concept is essential for administrations, politicians and city authorities that want to be smart, as well as for researchers when assessing progress and developing recommendations for such cities.

The second topic covers, among other things, an analysis of the evolution of EU energy policy and the ongoing energy transition regarding the European Green Deal strategy, which affects the EU's energy relations with third countries. Azerbaijan, a significant supplier of natural gas to the EU, was chosen as an example. Another article presents the results of a qualitative study to analyse and forecast the future of the European Union's relations with hydrocarbon exporting countries in Central Asia, based on bilateral agreements - the Partnership and Cooperation Agreements.

Among the articles addressing the final topic of the issue is an analysis of the structure, functions and methods of educational quality management in a contemporary school and a proposal for a school management system based on tradition. The contribution is based on research conducted in Polish and Ukrainian schools. In one article, the authors described the role of non-governmental organisations (NGOs) and assessed their capacity to act in critical circumstances such as state transition. The study places particular emphasis on the role of civil society institutions in political and media discourse in Georgia and Ukraine, enriching the study with new empirical material related to the involvement of such institutions in legislative processes and state development.