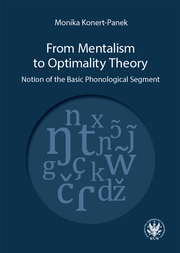 From Mentalism to Optimality Theory. Notion of the Basic Phonological Segment – PDF

The work discusses the notion of the basic phonological segment from the perspective of selected European and American phonological theories. The discussion consists in the analyses of specific phonological problems in accordance with the tenets of a given framework, starting with the Kazan School and ending with the Optimality Theory.

The goal of this study is to show the differences in the methodology and predictions of each framework that prove significant in the process of establishing the basic phonological unit. The dissertation elaborates on the data from English, Polish, German, and Russian.

The book makes a relevant contribution to the discussion on the phonological theory. Monika Konert-Panek consistently demonstrates differences between basic concepts, levels of representation and explanatory potential of frameworks, starting from the influential ideas of the Kazan School, advocated in the second half of the 19th century, to Optimality Theory, which constitutes one of the main formal approaches nowadays. Clarity and accessibility of presentation make it possible for the reader to understand the nature of a topic as complex and diversified as phonology. Therefore, the book is recommended not only for scholars and students interested in phonology but also for readers interested in general linguistics.
Prof. Paula Orzechowska, Adam Mickiewicz University in Poznań

The discussion presented in the book consists in the analyses of selected phonological problems from the perspective of a given framework. Not only does this approach allow the readers to examine classic theories from the perspective of their successors, but it also makes it possible to enter the minds of old masters to resolve some later-emerged problems with their analytical tools.
Prof. Klementina Jurančič, University of Maribor

Dr Monika Konert-Panek – PhD, works as Assistant Professor at the Institute of Specialised and Intercultural Communication at the University of Warsaw. She was also a Visiting Scholar at the University of Bologna, University of Trier and KU Leuven. Her current research interests cover the areas of sociophonetics, phonology and stylistics, with the focus on singing accent properties from the usage-based perspective.
Bibliografia