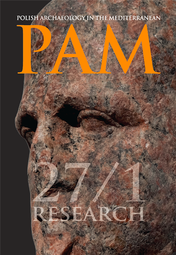 For readers interested in the most recent Polish archaeological discoveries in northeastern Africa, the Eastern Mediterranean and the Near East and Arabia, the PAM 27/1 volume brings 23 texts from 17 archaeological sites and excavation programs. Egypt is traditionally the best represented with projects from all periods and parts of the country: Alexandria Kom el-Dikka, Marina el-Alamein, Tell el-Retaba, Tell el-Farkha, Tell el-Murra, Saqqara, Asasif in West Thebes, Gebelein and Berenike on the Red Sea. In Sudan, the G.A.S.P. project at Ghazali and the Early Makuria Research Project, this time working at Tanqasi, present their findings. Articles concern also new sites in Jordan: the Roman and late antique Khirbat al-Sar/Sara and prehistoric sites in the al-Tafila region, and in the Arabian Peninsula: prehistoric and Bronze Age Qumayrah Ayn in Oman and Iron Age Saruq al-Hadid in the United Arab Emirates (Emirate of Dubai). The ongoing project at the fortress site of Metsamor in Armenia reports on another season of finds and the Chalcolithic section of the UGZAR survey in Iraqi Kurdistan discusses the latest results. Other Polish work is reviewed briefly in a chronicle at the beginning of the volume.

The growing STUDIES section includes four papers. First is an archaeometric study of ceramic building material from the Roman forts on the Colchis coast with Daszkiewicz providing an archaeoceramological analysis of the finds discussed from an archaeological point of view by co-authors Karasiewicz-Szczypiorski, Mamuladze and Aslanischvili. In the second paper, Jastrzębowska revisits a collection of wall painting fragments from the House of Aion in Nea Paphos on Cyprus, discovered some 30 years ago. In a meticulous study, she catalogs the fragments and reconstructs the mutual relations between the figural representations of the Muses, some of which she re-identifies based on parallels from late antique wall painting and mosaics. Two papers by Godlewski reflect his long-time research at Dongola in Sudan. In the first paper, he presents a short history of the Church of Makuria from the mid-6th to the early 12th century. His second article reviews the archaeological and architectural evidence for social change in 13th–17th-century Dongola.