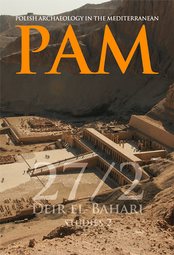 The second fascicle of the journal, special volume Deir el-Bahari Studies 2 (PAM 27/2), brings together 18 papers on manifold aspects of human cognitive behavior in Deir el-Bahari and the neighboring areas. Topics reach beyond the issues directly connected with the New Kingdom Temple of Hatshepsut, which is the core of Polish research and conservation work in Deir el-Bahari. The multidisciplinary contributions include studies by botanists (Beaux, on botanical remains from a recently discovered Tuthmosis III foundation deposit), zoologists (Braulińska, discussing the identification dilemma concerning a bird species represented in the temple decoration), bioarchaeologists (Campbell, on human remains from burials discovered in the Temple) and medical specialists in X-ray and CT-scanning (Ikram, Prates, Sousa and Oliveira, on a medley of mummies from the Third Intermediate Period cemetery in the ruins of the temple). Four studies complement the examination of Third Intermediate Period mummies from the Chapel of Hatshepsut: Sheikholeslami’s study of the Montu priestly families as attested in the material, Payraudeau’s assessment of the funerary assemblages from the Chapel dated to the Twenty-second to Twenty-fifth Dynasties, and two linguistic approaches to the Rituals of Day and Night on the coffins of Heresenes and Nespaqashuty, by Graefe and Griffin, respectively.

Pending a separate volume dedicated to this material, this is the most comprehensive presentation so far of this funerary complex from the Deir el-Bahari temple site. Archaeological papers concern various aspects of the architecture of the Temple. Robledo revisits the question of the original arrangement of the Upper Courtyard of the Temple, Dziedzic considers the issue of how false doors would have been transported to their position inside the Temple on the Upper Courtyard, whereas Barwik discusses dipinti from the relieving chamber above the Bark Hall of the Temple and their significance for understanding the craftsmanship involved in the construction and decoration of the temple. Griffin presents two relief fragments from the collection of the Egypt Centre in Swansea that were originally part of the temple decoration, while Kopp studies two blocks with relief decoration in the context of their place in the depictions of divine processions in the vestibule of the sanctuary’s Chapel of Hatshepsut. Stupko-Lubczyńska dedicates her paper to inscribed pot-stands from the temple decoration and Szafrański studies the fragments of royal statues in the form of the god Osiris coming from various places in Deir el-Bahari. Beaux, Caban and Wieczorek present a recent discovery of a double foundation deposit in the Hathor Shrine of Tuthmosis III at the site. Material studies are undertaken by Madej, who looks at stamped bricks of Amenhotep I from Deir el-Bahari, and by Kaczanowicz, who contributes a typology of the clay funerary figurines found in the fill of tombs MMA 1151 and MMA 1152 at nearby Sheikh Abd el-Gurna.

Complementing the fascicle is an updated comprehensive plan of the Temple of Hatshepsut with an index to locations inside the complex.