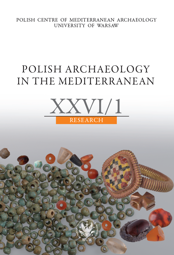 The volume opens with a comprehensive review of work carried out by PCMA archaeological and restoration teams in 2016. This includes extensive reports presented by several projects: long ongoing ones like the Alexandria Kom el-Dikka Mission and the Marina el-Alamein Project in Egypt as well as the relative newcomers, such as the Beit Ras excavation project in Jordan and the investigations of Metsamor in Armenia. As usual, Egypt and Sudan has a more numerous representation, encompassing projects of long standing like Dongola, Banganarti, Tell el-Retaba, Tell el-Murra, and current grant endeavors like Ghazali in Sudan. Outside Egypt, there is the PCMA project in Nea Paphos on Cyprus, as well as the first reports from a new complex of sites, which a PCMA team has started exploring in Oman. Rounding off the fieldwork section is a convenient listing with brief characteristics of all the projects that have carried out fieldwork and research under the auspices of the Polish Centre of Mediterranean Archaeology in 2016.

The second part of the volume is composed of research articles based on the results of recent archaeological excavations. Koliński sums up the results of the UGZAR project in Iraqi Kurdistan at the halfway mark and Mardas considers the state of preservation and assesses the damages to archaeological sites in this region. Jakubiak takes a closer look at the campaign of Urartian king Argishti I in the Araxes valley from the Metsamor perspective. The Near Eastern late Bronze Age and early Iron Age perspective also comes through in the research of Hamburg and Pawłowska, which focuses on the metal accessories of garments attested in the graves excavated at Beshtasheni in eastern Georgia. Burdajewicz and Gawlikowska take up glass studies, discussing the finds from two classical sites, Beit Ras in Jordan and Pelusium in Egypt. Czyżewska-Zalewska presents the second of her articles contributing observations on pottery making technologies in Sudan. Metal objects of a religious attribution are presented in two research articles: Wyżgoł undertakes an analysis of a bronze censer from the cathedral in Dongola (Sudan), as yet unpublished despite being found in the mid 1960s, and Ryś develops the iconography of cross-shaped encolpia from the monastery complex in Naqlun in the Egyptian Fayum. Last but hardly the least, Then-Obłuska contributes two heavy-weight studies, one of the bead assemblage from the Eastern Desert in Egypt (“Between the Nile and the Ocean”) from the 4th to 6th century AD and the other presenting the royal ornaments of the late antique African kingdom of Early Makuria in Nubia (from the mid 5th to the mid 6th century AD.

A new development in the PAM journal is a sub-section intended to promote academic research in the field of archaeological conservation and the theory and practice of archaeological documentation methods, as well as archaeological heritage site management. Introducing the first is an article by Otto Bagi on the significance of 3D-modelling in archaeological fieldwork based on direct experience in the Metsamor project. The second is represented by an assessment by Joanna Mardas of sites surveyed within the frame of the UGZAR Survey project.

This year the journal carries also a second fascicle (PAM 26/2), devoted to studies in Red Sea archaeology, reflecting a major research direction today in the Polish Centre of Mediterranean Archaeology. The dozen or so articles, which are an aftermath of a successful conference held in Cairo in March 2016, represent the scope of work done by the Polish–American expedition in Berenike on the Egyptian side of the Red Sea and the Polish–Saudi project at Aynuna, Berenike's presumed sister port on the Arabian side of the sea. Papers include Juchniewicz on the first results of the Aynuna dig, Woźniak on the Hellenistic beginnings of the Berenike port and Kotarba-Morley on the geoarchaeology of the Berenike site. Zych gives an overview of the evidence from recent excavations on the “Imperial” harbor of early Roman Berenike. Kucharczyk characterizes the luxury glassware of the early Roman harbor town, while Then-Obłuska specifically looks at the beads and pendants coming from the late Harbor temple. Marta Osypińska and Piotr Osypiński go into the evidence on the emergence of a human–pet relation coming from Berenike's exceptional animal cemetery and Hense reviews the historic research on the Great Temple of Berenike on the eve of a new excavation project. Eguiluz Maestro gives a rare glimpse into the life of a conservator at a dig like Berenike. The volume opens with an essay by Michał Gawlikowski on the Indian trade between the Gulf and the Red Sea, which was presented originally as a keynote lecture at the University of Warsaw PCMA workshop “The Red Sea and the Gulf” in October 2013.