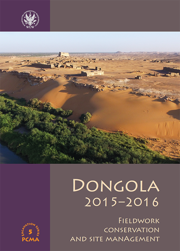 The Polish Center of Mediterranean Archaeology University of Warsaw mission to Old Dongola has been excavating the site for over 50 years. This volume is a second comprehensive report on fieldwork and conservation conducted in 2015–2016 by a team led by Włodzimierz Godlewski. The contributions report on the work of recent seasons and present in-depth studies on the site’s urban development, architecture and building techniques. The volume also includes results of the most recent specialized research on material brought to light during these and earlier campaigns. The discussed categories of find include inscriptions, ostraka, pottery, animal bones, and textiles.

The royal city of Old Dongola was the political and economic center of Makuria, a medieval Christian kingdom. It flourished from the 5th/6th century, when the royal complex on the Citadel was built and enclosed within massive stone fortifications. Over the centuries, other representative buildings were founded, among them the imposing Throne Hall later converted into a mosque that still towers over the site today. Equally impressive are the religious complexes unearthed in Dongola. The Makurian capital’s churches and monastic buildings boast stunning mural paintings and inscriptions that shed light on local religious practice, while their architectural design testifies to the skills of local builders. After the royal court abandoned Dongola in 1364, the city remained an important urban center, as indicated by the extensive residential quarters functioning on and around the Citadel for several centuries. The city, still a vital node in the long-distance trade network, was inhabited by a lively community, which cultivated old traditions and embraced new trends.

The wealth of archaeological finds recovered on the site in the seasons under consideration contributes new data to studies on the history of Dongola , as well as the culture, art., architecture and economy of the kingdom of Makuria.