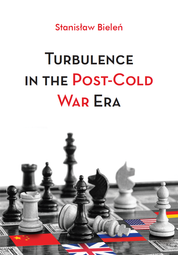 The author pinpoints the relations between geopolitics and globalisation from the angle of the post-Cold War politically turbulent order. Against this background of a clash between two opposing tendencies – revisionism and defence of the status quo – the author determines the dynamics of the deconcentration of forces in the international system, which is increasingly polycentric and less and less monocentric.

He devotes much attention to the identity crisis of the West (from the crisis of US leadership to the depreciation of NATO). He characterizes Russia, with its aspirations to rebuild its superpower status and its imperial mission, as the main geopolitical opponent of the West. Pointing to the contemporary discourse on Russia and the risk of escalating a new confrontation reminiscent of the Cold War era, he critically assesses the consequences of Poland's international policy.