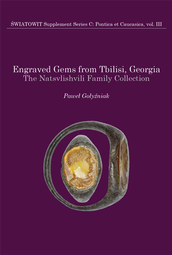 This book presents nearly 200 objects of glyptic art from the Natsvlishvili Family collection, Tbilisi, Georgia. Their cultural, geographical and chronological diversity is considerable starting from the Near Eastern cylinder and stamp seals as well as amulets, through the Egyptian scarabs, Greek and Roman intaglios and cameos, the post-classical gems and contemporary forgeries.

This eclectic collection was a base for an essay on the subject of how to differentiate genuine ancient engraved gems from their modern copies, pastiches and forgeries. That essay is an introduction to the detailed analysis of the objects discussed in the catalogue section. Overall, it is confirmed that the cabinet contains products of the local glyptics as well as the imported ones to the territory of Georgia from all over the world through ages. The book also gives a valuable insight into the role of Tbilisi as a hub for exchange and trade in antiquities and works of art in the second half of the 19th and 20th century.