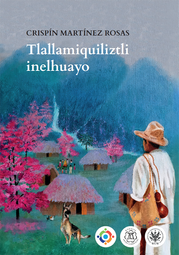 Tlallamiquiliztli inelhuayo is a novel in the Nahuatl language written by Crispín Martínez Rosas, an Indigenous author from a Nahua community in the Mexican state of Veracruz. Enriched with descriptions of local customs and beliefs, it immerses us in the reality of the inhabitants of a small, Native village engaged in a dispute over land with Church and government-backed paramilitary forces in the 1970s.

Crispín Martínez Rosas – was born in a village in Chicontepec, Veracruz, Mexico on October 25, 1977. When he was small, his parents lived in the village of Guayalejo, in the municipality of Pánuco, Veracruz, and there he grew up. He went to elementary and secondary school in his hometown, and then he studied at the High School for the Study of Agricultural Science no. 136 in San Sebastián, Tantoyuca, Veracruz. In 2002 he began to work at the radio station XECARH “La Voz del Pueblo Hñahñu” in Cardonal, Hidalgo, and continues to work there. In 2015 he began his undergraduate education in Community Development at the UNADM (Universidad Abierta y a Distancia de México), concluding his studies in 2019. He also plays the guitar and composes songs in Nahuatl. As a performer, he is known as Crismar.