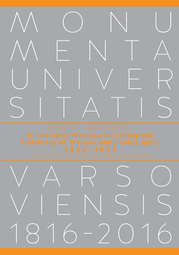 The bilingual (Polish-English) and richly illustrated book is an attempt to show the references between the history of University of Warsaw and the development of photography – a crucial invention for the new visual civilization.

The book covers the period from 1839, when the invention of daguerreotype was announced in France and when the first daguerreotypes were made in Poland, to 1921, when the situation of the University, reactivated during the World War I, was finally stabilized after the Polish-Soviet War.

On the one hand the book presents the buildings of the University and the oldest photos of the people who created the history of the institution, on the other hand – it contains the reflection on the origins of photography in Warsaw and on the participation of the scientific milieu in its development. Which is worth noticing, at the beginning of the 1850s the scientists of the University of Warsaw already regarded photography as a useful research tool.

The book is divided into two parts. The comprehensive essay illustrated with several dozens of figures is devoted to the origins of the photography and to its connection with the University of Warsaw. In the album more than 100 photographs (with the extensive commentaries) present the portraits of the professors and the students, the buildings and the important events related to the University.

See other books in the series: Monumenta Universitatis Varsoviensis »