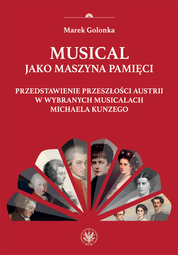 Musical as Memory Machine. Performing Austria’s Past in Selected Musicals by Michael Kunze

Michael Kunze, librettist whose works include Elisabeth and Dance of the Vampires, enjoys immense popularity throughout Europe and Asia. His biographical musicals are not only impressive shows but also fascinating attempts at introducing the audience both to Austrian history and to mechanisms of presenting the past by means of modern music theatre.

Musical as Memory Machine discusses the creation process of Kunze’s two famous musicals, Elisabeth and Mozart!, in the context of studies on collective memory and of the Euro-American history of music theatre as a form of entertainment. The book demonstrates that the musical has long been tightly intertwined with the memories of the societies where it is staged, and that the history of the musical as a genre is inextricably linked with Vienna.