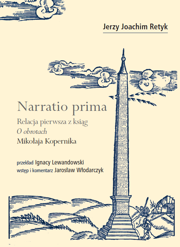 In 1540 the world first heard about the heliocentric theory of Nicolaus Copernicus. Paradoxically enough, this revolution in astronomy was announced not by Copernicus himself but by Georg Joachim Rheticus, a young Lutheran mathematician of Wittenberg, who published the First Account of the Books “On the Revolutions” by Nicolaus Copernicus. His book preceded the publication of Copernicus’ De revolutionibus by three years and became one of the most fascinating texts documenting the life and work of the great Polish astronomer. Rheticus wrote the Narratio prima in Lubawa where he stayed with Copernicus.

PhD Assoc. Prof. Jarosław Włodarczyk – is Professor at the Institute of the History of Science at the Polish Academy of Sciences in Warsaw and at Maria Curie-Skłodowska University in Lublin. He specializes in the history of astronomy and the relations of science and culture in various epochs. He is editor-in-chief of Studia Copernicana.