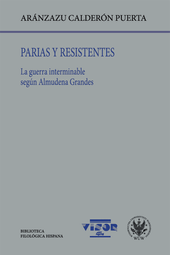 The book Parias y resistentes. La guerra interminable según Almudena Grandes written by Aránzazu Calderón is an important work that I believe that should be read by both, those interested in Spanish Literature and Spanish History. It is also a text that reflects the great debates in these two disciplines. Both the need for the historical memory of nations and the genesis and reinforcement of what Rosenwein has called emotional communities (2006) appear in this book analyzing Almudena Grandes' novelistic project, which is entitled "Episodios de una Guerra interminable".

Again we see Calderón apply great originality and theoretical eclecticism to face the study of the resistant ones that appear in the novels. Thus, observing the community of women as spaces of resistance, she analyzes the different situations of resistant women that appear in the novels of Almudena Grandes. Prisons, Francoist asylums, geographies, and works of exile always appear as spaces of solidarity and resistance in the works analyzed by Calderón.
The conclusions of the book lead us to the certainty that the literary texts analyzed by Calderon, not only help historical knowledge but are in themselves a means of knowing the past.
Carmen de la Guardia Herrero

The theoretical framework on which it is based is solid and relevant. As for the critical apparatus, the bibliographical references cited from authorities in the field are well-managed, very numerous, very complete and very up-to-date, coming from several languages, several countries, several research traditions and several disciplines of knowledge.
Jose Jurado Morales